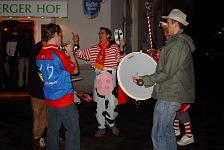 Not sure if you guys know, but the 11th of November at 11:11am is a very special day / moment. In a few cities / regions in Germany — such as Köln (a.k.a. Cologne), Mainz, Düsseldorf, etc. — it’s the start of the Karneval Saison, the „Fifth Season“ for the people living in those parts of the country..

Being from Berlin (where people typically have a rather antagonistic opinion on all that buisiness) I do not know all that much about this stuff, but make sure you read the Wikipedia article on it ;-)

Why am I mentioning that? Well, purely by coincidence I happened to visit a good friend of mine that particular week end, and when I tried to get some classical breakfast ingredients like Brötchen (a.k.a. bread buns / bread rolls depending on where you from) or Croissants it was simply not possible to reach the bakery because of all the people on the street already getting wasted at 9am. Well, this continued for the entire day, and it actually looked like fun (I didn’t have any costumes or the like on me, so I couldn’t really join in), and I’ve decided that at some stage, I wanna go with it, full time :-)

It just needs a bit of preparation to look as funny as all the other people… On the photo that was one of the many little bands that played some random semi-rythmic noise to celebrate their drunkeness :-)

Eat yoghurt and get cultured!