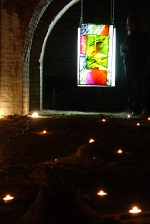 Tuesday, there was a little arts exhibition and a party announced to take place in a very unsual location: the catacombs of an old monument of the Kaiser the statue of which had been removed by the GDR, thanks Bea for pointing this out (see third comment). The great thing: It’s in the very in centre of Berlin, and you would never ever get to see those spooky arches underground, right next to one of the smaller arms of the Elbe Spree (the river that flows through Berlin), and the old Palast der Republik.

So the entrence itself was pretty dodgy, just one small little manhole, and a 5 meters ladder… Down you came straight into the old catacombs, where some artists put up a variety of light– and sound installations.

Unfortunately, the party was canceled on the night itself when suddenly some police men showed up and bascially forbade the whole thing for a number of reasons. It was great to have a look around anyways, and I also got to take some nice night shots…

I became a professional fisherman, but discovered that I couldn’t live on my net income.