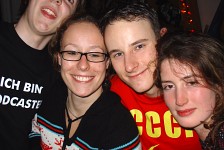 So Saturday was that big communal birthday party… Communal as in there were several people celebrating their anniversary.

After a big cooking session — kindely supported by Sarah and Julia, my two guests from Magdeburg (where I went to uni, yonks ago) — fixing large amounts of pasta salads and chili con carne, we went to the party in Moabit (a fairly central district of Berlin).

It was a bit slow to take off (but the reason was that we went there relatively early to help with the usual party prepartions), but then it became pretty crowded :-) As the evening went on, people even started dancing!

Shame on my Aussi friends — none of you showed up! Come on! ;-) Thanks anyway to my dear guests from outside of Berlin for coming!