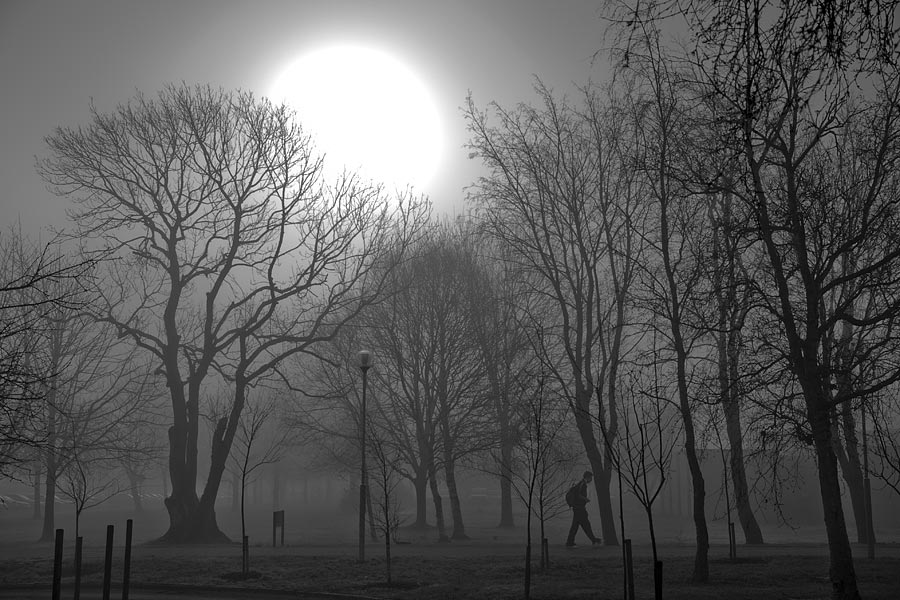 Here’s another one, probably one of my weirdest photos, mood-wise. I took it on campus, some winter morning when there was that proper Irish Fog in the air.

Clearly, the photo is heavily post-processed, but only in a global way — so no local manipulations, just mucking around with brightness, contrast and tone curve. I have to admit that I didn’t “see” the picture like that when I pressed the shutter release. The original image itself is fairly “boring” due to all the fog and low contrast, or let’s say “straight forward”. But it was really through playing with pretty much all the sliders in LightRoom 1.3 at the time that the picture came out that way.

The big white disk (which many people think is the moon, but it is actually the sun) came from controlled blowing out of the highlights. In the original image the blown out area is just a few dozen pixels wide, as I intentionally underexposed the picture when I took it, not to loose any information. But then pumping up those highlights again made the sun transform almost into a supernova which adds this extra bit of weirdness to the image.

I might come back to that picture one day and fiddle with it a bit more. Probably remove those posts in the foreground, and maybe the lamp. I’d probably brighten the picture up a bit too, but I’ll leave it as it is for the time being :-)

PS: I posted the LightRoom settings for this picture here, if you’re interested.