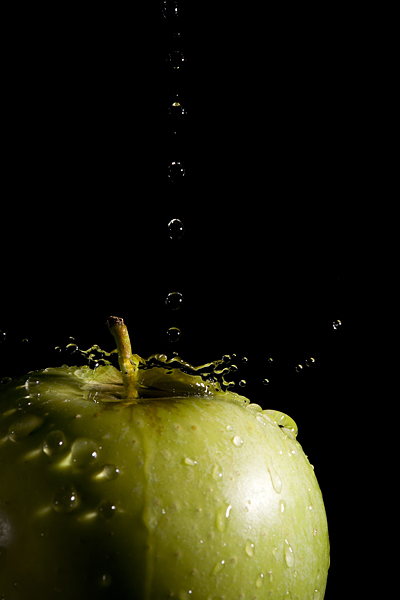 Just as a big Californian company is releasing new products as we speak, let’s go back again to a purely “photographic” entry.

This shot was a bit of an experiment… Inspired by this post in the amazing Digital Photography School blog, I wanted to take a photo involving water drops. For the set-up of the shot, check out this “making of” photo.

The apple was placed on a glass in a sink where I “fine tuned” the tap so that only a small volleys of drops would come out every now and then. If you look at the aperture and the exposure time, you’ll see that the ambient light couldn’t possibly influence the shot. That’s why the background appears completely black. The reason for these extreme settings was to achieve exactly that, to freeze the motion as good as possible and to have a large enough depth of field in this rather macro-y situation.

Lighting. As you can see in this shot, the only light here was coming from an external flash (triggered wirelessly), a mirror (to bounce some of the light back) as well as two improvised reflectors. After fiddling with the exposure parameters and arranging the reflectors, I took about 20 shots trying to get the timing right with the drops randomly coming out of the tap (which is harder than you’d think). In the end, I was really happy with the outcome, I got pretty much exactly what I wanted.

PS: Thanks to Kfir (my office-mate) for borrowing me an apple — I’m allergic to them, so I returned it after the shot :-)