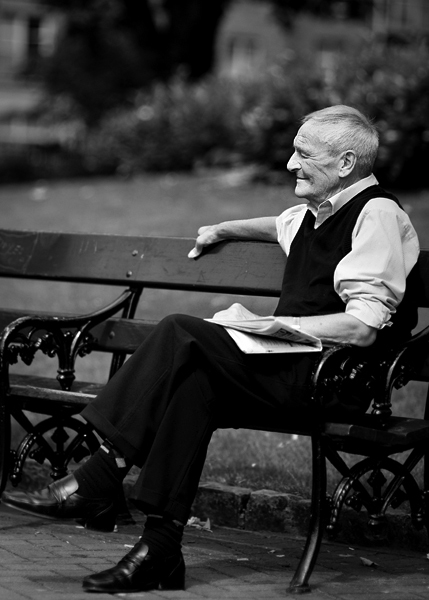 I just noticed that until now I’ve posted anything but portraits. So let’s change that.

Today’s picture is one I took in July this year, when Steffi and I spent a wonderful afternoon in Dublin. The weather was great, so we went for a stroll around the city and passed through St. Patrick’s Garden, which is right next to the St. Patrick’s Cathedral, the biggest church in Ireland.

In the park, there was that old man just enjoying himself, his newspaper, the beautiful weather (rare enough), his grandchildren speeding about the park, or probably a mix of all that. He looked so happy and relaxed that I worked up the courage to go over and ask him politely if he’d mind if I photographed him. He smiled, said he did not at all and wondered where / how best to look. I told him “just as you did before, as if I wasn’t here”. And so he looked back at his grandchildren …

The post-processing of this picture involved a lot of cleaning up of the ground underneath the bench (mostly using the clone-stamp tool) and of course the b/w conversion (giving more weight to the red channel, as it had most of the contrast). Some careful sharpening and a bit of black clipping (to further boost contrast) gave the final image.