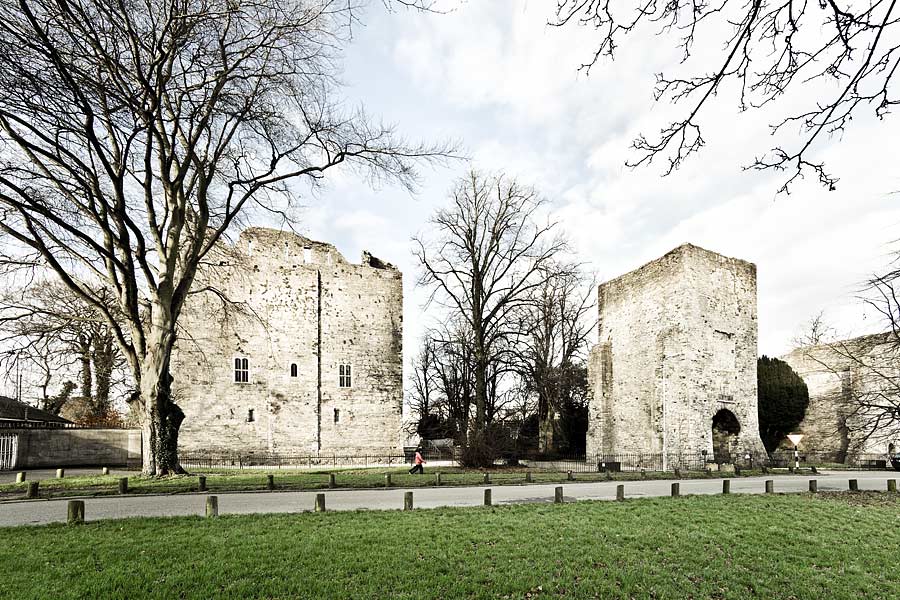 Normally there are always cars parked in front of the old Maynooth Castle ruins, but on St. Steven’s Day (Dec 25th) the town was as empty as I’ve ever seen it, and no cars spoiled a shot that I wanted to take since a long time. Apart from messing with the colours, there are two interesting things about this photo.

On the one hand it was taken with my new camera (finally I’m also in possession of a full frame camera, that is a camera whose sensor is the size of a 35mm film negative) and as well as my new wide-angle lens.

On the other, I used the lens distortion tool in Photoshop to correct the perspective distortion that comes with shooting at an angle. By perspective distortion I mean the effect where vertical lines (that ought to be parallel) converge toward the vanishing point, and buildings appear to be falling backwards, if left uncorrected. There’s basically three things you can do to avoid this effect. (1) Buy a (tilt/)shift-lens, (2) shoot horizontally at a wide enough angle to capture what you want to capture, but crop afterwards, like so or (3) correct for the perspective afterwards in post-processing, e.g. with the Lens Correction Tool in Photoshop. The best technique would be (1) to use the specialised lens as it allows you to use the full resolution of your sensor, but those are expensive and not available for all camera systems (e.g. mine). As for (2), you throw away resolution afterwards as you’ll be cropping large parts of the image, and you have to think of this technique on the spot already, while you’re taking the photo. The last method is kind of in between, you don’t loose too much information, but it is a destructive transformation to your images (at least for the time being, fingers crossed it’ll be included in LightRoom soon).

In this present photo I chose technique (3) as I don’t have a tilt/shift-lens, and 17mm was not wide enough to do trick (2). Anyway, I hope you’ve now learned a little bit about how you can avoid perspective distortion, provided you have the right gear / software at hand.