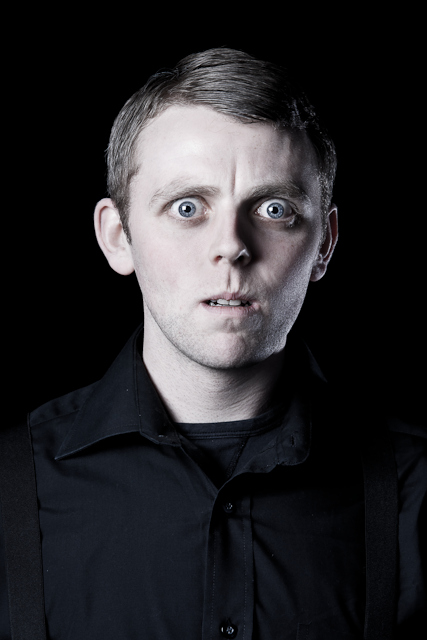 The drama society recently produced a play call “Remembering Rose”. Written by a student here at NUIM, it was one of the funniest pieces I’ve ever seen! I hope the script makes it beyond three performances here on campus.

Anyway, I offered them to make some promo shots and they gladly accepted. Here’s what came out of it.

So how did I do these photos? Well, the secret to a black backdrop is that you kill all light sources and just use flashes, but making sure that you only light the subject, not the back background (i.e. don’t put your subject in front of a wall). The set-up here was: 1 large softbox fairly close to the person, about 45° from the left, just above eye-level, and another flash with a reflector and honeycomb-filter (to direct the light) from behind to the right, about at hip-level, a fair bit off so it doesn’t fire into the camera.

But the biggest thing here for me was that it was my first proper photo shoot (if you don’t count the one with Andrea a few weeks back). These guys didn’t know me, I didn’t know them, I just bluntly promised them some nice photos (and I didn’t tell them it was my “first time” until afterwards). But it all turned out quite well, I think. The biggest lesson I learned (again) was that you really need to direct people. The more concrete, explicit and precise you are, the better. Being photographed by a stranger is in itself a fairly awkward situation, you’re not quite sure what’s going on, if you’re “doing it right”, and so on — so being told what to do reduces this insecurity as you can just focus on what you’re told to do. However, this can be challenging as you also have to think about all the technical as well as artistic issues… But the best way around this is: practice, practice, practice.