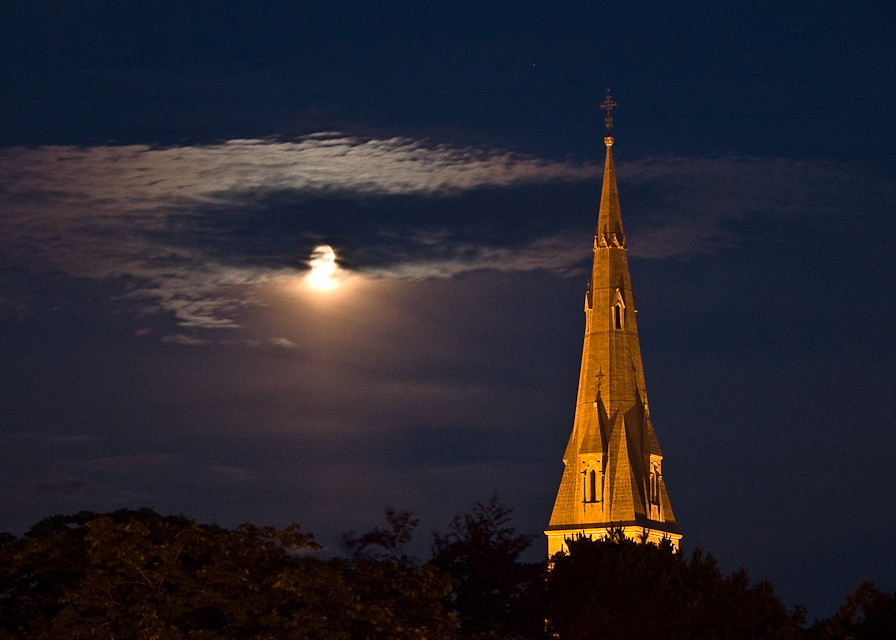 You know what happened a couple of nights ago? A really nice constellation of Moon and chapel of Saint Patrick’s College could be seen right from our balcony, including a nice cloud which added to the mood. Unforunately I left my own camera over in the office that day, so I had to dig out Steff’s 7 year old Nikon Coolpix 5700 to capture the scene.

But anyway, having the camera rested on the balcony table, and snapping off a few 8 second exposures, I had to smile a bit when our neighbours had the same idea: Unfortunately, they were trying to use their flashes to get the picture right… This made no sense, as 1) any on-camera flash is so weak that it usually never reaches more than a few meters (and the trees and tower were a couple of hundred meters, and the moon a couple of hundreds of thousands of kilometers away). Thus, all they were doing was 2) wasting their camera batteries and 3) reducing the contrast in the picture (as the flash would have lit the slight mist in the air and thus just make the blacks look “milky”).

What you need to do in such extremely dark conditions would be first of all turn off your flash. Then, make sure you rest your camera on something (a tripod would obviously be the easiest solution) and use the self-timer to take the shot (as pressing the shutter yourself would shake the camera and your picture will loose crispness).

So as I was saying in the last post, it’s not the most expensive camera that takes the photos, but the photographer with his experience and taste.