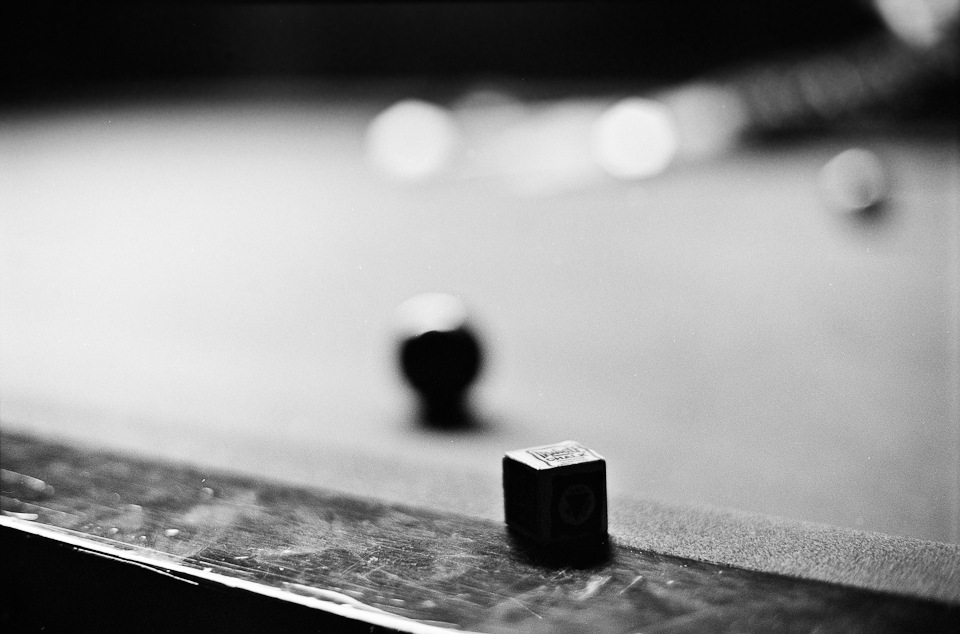 A small permière — here’s my first “analog” image on this blog. Yes, “analog” as in taken with an old analog camera on black & white film (Ilford XP2 Super). Nothing too special, just a nice, moody photo I took down in the snooker hall of the college.

I recently started taking film photos again for a number of reasons. First of all, it’s kind of cool. Second, pressing the shutter button costs me roughly 50c each time, so even though these are not huge sums (compared to medium format or even large format photography) you don’t just go simply snapping away like you were using a digital camera. No, you end up slowing down a lot. Double and triple checking everything, composition, camera settings — especially shutter speed as there’s no “sensor based” image stabilisation on film, so I have to be very conscious of the 1-over-focal-length rule, see here for example — and if the person I’m about to shoot is about to blink her eyes. Third — not that I think my photography will be any more relevant in 50 years than it is now — people will always be able to do something with a film negative, but not necessarily with a file in an ancient film format, if it survives that long anyway and doesn’t get lost in a hard drive crash.

At the moment I’m just getting the film devoloped down at the chemist (3 EUR for a roll of 36), then “scan” the images using my digital camera on a self-built light table, together with a macro lens and flash gun from below. Forgive me, but I’m really proud of the set-up — you can see the proof of concept set-up here, and the current version here. Obviously a flim scanner would be better at handeling dust and other types of airborn dirt, but none of the affordable ones give you 25 Megapixel scans ;-)