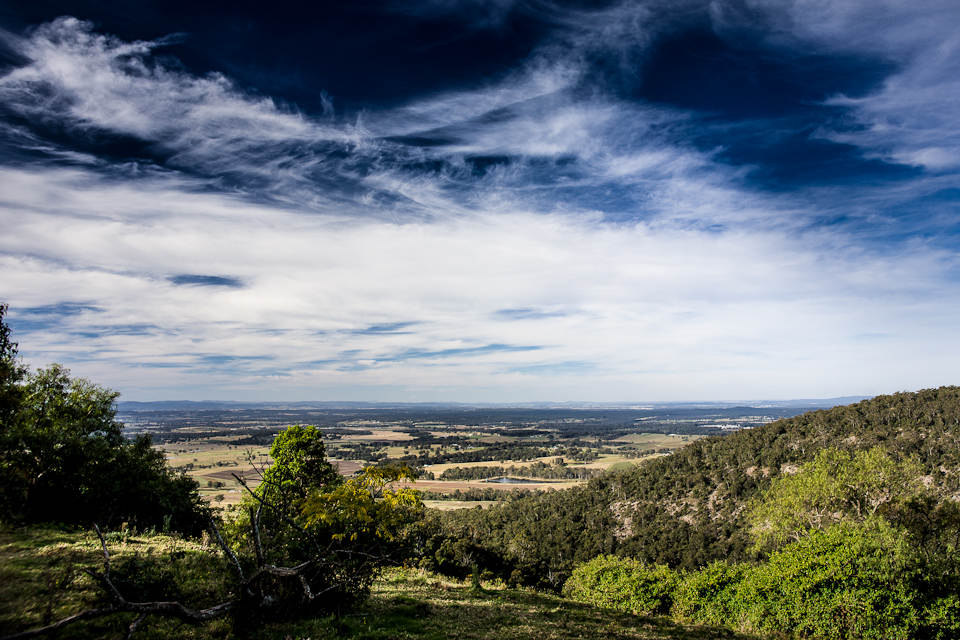 We recently drove up to the Hunter Valley, a fairly renown wine growing region less than an hour’s drive away. That’s a great thing to have :-) Countless little wine estates and cellar doors to try wine at a decent enough prices. Good fun!

The tour also took us by this little lookout that offered some lovely views over the valley. Unfortunately, it was a semi-overcast day, and the first version of this shot pretty much just had a grey blob of sky at the top. The small little bits of blue sky didn’t come out at all. Thankfully I packed my polarising filter, which was the first thing I tried out. And wunderbar, it did indeed darken down the blue bits somewhat so they they could actually be identified as such.

But there still was a fairly large difference in brightness between sky and ground. So I put on the second filter I own (and that’s the only two I have): a graduated neutral density filter. It’s designed to be used with the Cokin filter system, but I pretty much only used it free-hand (so just hold the square filter by hand rather than with the filter holder). Much faster that way, and pretty much same result, if you manage to coordinate holding the camera, adjusting the filter and operating the shutter at the same time ;-)

What that filter did was bring down the brightness of the sky a fair bit, but leave the ground untouched. As the name suggests, it’s a filter which is neutral density on one side (so just makes things darker), and clear on the other, with the smooth transition (graduation) in-between so you don’t notice it that much (it’s the first filter in this list). A very handy tool to have in your photo bag!

Sprinkle a ton of “Clarity” during raw development on top and and that’s how I got these fairly dramatic skies from the fairly bland looking light grey blob the sky was at the time.